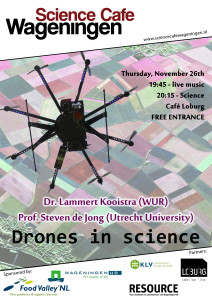 At the start of the Science Café session on “Drones in science”, our moderator Jelle de Gruyter shortly introduces the topic to an audience that (for a change?) seems to consist of slightly more guys than girls. Dr. Lammert Kooistra from Wageningen University and prof. Steven de Jong from Utrecht University are showing us tonight how drones have influenced their research projects in agricultural systems and glaciers, what opportunities drones provide and what are some challenges we’re facing.

Dr. Lammert Kooistra starts by asking if drones are indeed a hype. Their media coverage does definitely indicate that they are popular, as devices to fight poaching, to deliver packages, or to track sharks in coastal waters that might pose a danger to human swimmers. Drones in science are often called unmanned aerial vehicles (UAVs), and their increased use comes with issues in the fields of privacy, security and safety. In research the most important role of a UAV is as a flexible platform, bridging the gap between satellite and aerial measurements from high above, and field measurements at ground level. His team is using UAVs since 2012 and is flying worldwide, participating in studies on the spread of banana disease, erosion, flammability and the mapping of musselbanks to name a few. The increased detail as compared to aerial and satellite measurements allows for much more detailed studies of the landscape, covering larger areas than would be possible with field measurements at ground level. Challenges for the use of UAVs in science are still to be found in the cooperation required between scientific disciplines to work with UAVs and their data, and in the development of fixed procedures to gather data using UAVs.

In the team of prof. Steven de Jong, UAVs have been used to gather data in research on for instance landslides, gulley erosions and dune surveillance in times of storm. In the Himalayas they are using UAVs to study the behaviour of glaciers. The Himalaya region is very important for the provision of fresh water and can be called the water tower to a fifth of the world population, but we understand little of how this may be affected by global warming. It seems the resilience of the region is decreasing, and we have to find ways to deal with that. UAVs allow to study the behaviour of glaciers in the region in a way that wasn’t possible before. Their flexibility opens new opportunities. The team of prof. de Jong has been studying a glacier in the region before and after the monsoon period, to be able to calculate the deformation and down wasting of the glacier, and learn about the behaviour of the water system in the Himalayas.

Both researchers treated us on a short movie made by their drones during the field research. Their talks stimulated members of the audience to even ask if they should also use drones or if that would be too expensive. Although the cost of drones nowadays is surely not limiting anymore, drones are not able to really take measurements that go into the soil, as this is too energy intensive for the battery packs. Although current legislation does not allow flying UAVs close to private property, privacy and data sharing remain topic for discussion.

Music for tonight was provided by the band Troubagroove of Javier Vicente. Unfortunately we had to stop a bit early this time, but we promise that next time you can continue your discussions in Loburg long after the session has ended. We’re looking forward to welcoming all of you at the next session of Science Café. See you there!