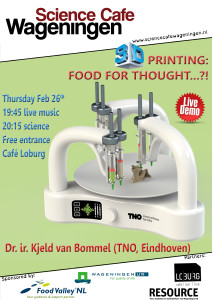 Summary
“The future tastes good” was the final message from our speaker in the last session of 3D printing held on 26th February. 3D printing though was invented and explored since 1984 the drastic increase in awareness was seen only in recent decade.

Our speaker, Dr. ir. Kjeld van Bommel from technical sciences department at TNO, Eindhoven threw light upon the current 3D printing technology. He started with his talk by giving an introduction on the layer by layer building of an 3D object in contrast the the widely known 2D printers. There are different kinds of these printers each based on different principles and the kind of materials they are capable of using for 3D printing. Also, each of these can vary depending on the complexity of objects that they can print. While some of them can print and assemble complex objects like a toy machine which are made up of different parts while some others can print individual objects which are later assembled together by skilled labours. The most simplest ones are very handy, cheap and are available at many households used primarily for different designing and recreational purposes. The broader of this technology in creating personalized products in the filed of human and health with the ability to scale down to economically feasible levels has made this technology very popular in recent years.

His main focus was on food printing and he detailed on how this technology development can help in producing personalized food with convenience, new designs, specific ingredients, flexible production etc. With examples and the opportunities in this field, he made the audience realise the great potential behind this technology and its uses. The curiosity in the audience was not confined only to the talk but also the SCW manages to demonstrate in live the working of the 3D printers.

Mr.Dian Stoichev alongwith his partner Mr.Lukas Trebuch presented the small desktop 3D printer that they are using currently to build a prototype of a ‘Hydroalgae power’. They successfully printed and assembled a key chain during the 2 hours session. It was highly successful session with great enthusiasm from people both during the talk, the demonstrations and the discussion. In the end it would be great to reflect upon the advantage of this new technology and its benefits.