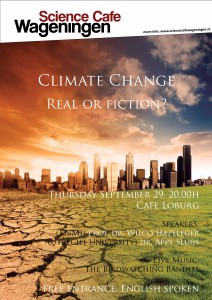 Summary
Climate change has been a topic extensively discussed and debated in the media the last two decades. In 2009, Europeans rated climate change as the second most serious problem in the world. However, only half of the American population believes that climate change is caused by human influence. Furthermore, there is great skepticism about measurements and figures revealing temperature changes and CO2 emissions. In conclusion, the issue of climate change is complex and controversial: what should we believe, what will happen and to what extent are we responsible for these changes? This edition of Science Café Wageningen will be devoted to these questions. Two expert speakers will discuss past and present climate change.

Prof. dr. Wilco Hazeleger studied meteorology at the Wageningen University and graduated with distinction in 1994 after which he went to Utrecht to do his PhD in physical oceanography. Then Wilco went to New York, to conduct research on decadal climate variability at Columbia University in New York. Since 2002 he works at the Royal Dutch Meterological Institute (KNMI) where he now leads the Global Climate division. Next to his work at the KNMI, Hazeleger is member of a number of international and national science committees and is involved in many national and European projects concerning climate modeling, climate change and climate adaption. Amongst other activities, he has a chair in Climate dynamics at the Wageningen University Professor Hazelegers research involves the determination of changes in the circulations of the earth’s atmosphere caused by natural factors or humans and the influence of climate change on the human living environment.

Dr. Appy Sluijs has studied Biology and Biogeology at Utrecht University. In 2006 he obtained his PhD with distinction at Utrecht University. Currently, Appy Sluijs is Assistant Professor at the Biomarine Sciences group at the Institute of Environmental Biology at the University of Utrecht. Sluijs is also a member of The Young Academy of the Royal Netherlands Academy of Arts and Sciences. In 2007 he received the prestigious ‘Outstanding Young Scientist Award’ of the European Geosciences Union (EGU) for his research on marine sciences. He was the youngest scientist ever to receive this award. Next to his work as researcher and teaching, Sluijs is a member of the editorial board of the Geosciences journal ‘Geology’ published by the Geological Society of America (GSA) and he is also an editor of the open access journal ‘Climate of the Past’ published by the European Geosciences Union. The focus of Appy Sluijs research is climate and ecological change in the geological past. He investigates periods in the past, characterized by a rapidly increasing or generally high CO2 concentration in the atmosphere. The purpose of this research is to gain insight and understand about the functioning of the earth under ‘greenhouse’ conditions.

Live music was provided by the Birdwatching Bandits.