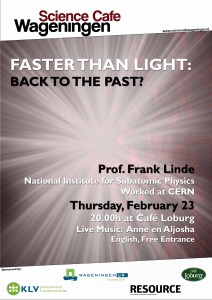 Recently, scientists claimed to have recorded subatomic particles that could travel (from Switzerland to Italy) faster than light. This finding, if true, would overturn the very fundaments of 100 years of physics and with it all fundamental and widely accepted theories based on the cornerstone of Einstein’s theory that nothing can travel faster than the speed of light. The issue has been extensively discussed in the media, up to the point where people started to fantasize about traveling trough time.
In this edition of Science Cafe Wageningen, Prof. Frank Linde (director National Institute for Subatomic Physics) will discuss the myth and reality of the experiment and its implications.

Prof. Frank Linde studied astronomy and physics at the University of Utrecht, during which he conducted research at the CERN institute (Geneva) . After his PhD thesis at Stanford and in Amsterdam he spent several years establishing a research program at CERN institute. He became a staff member at the CERN institute on the ATLAS experiment and became professor at the UvA in 1993. In 2005 he became scientific director of the NIKHEF institute (National Institute for Subatomic Physics).