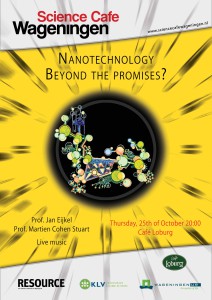 Nanotechnology – the manipulation of materials at the level of individual atoms and molecules – has been advocated as a revolutionary technology, holding promises for a wide variety of applications, ranging from electronics to nanobots that deliver targeted drugs to specific cells in humans. These days, some of these promises seem to get fulfilled. Fear about possible environmental risks of nano-scale technologies is, however, starting to emerge as these small particles may harm human and animal health.

The upcoming edition of Science Café Wageningen features two experts who will discuss a technology both in quick development and frowned upon by sceptics. Prof. dr. Martien Cohen Stuart will provide an overview about the basics and underlying principles of nanotechnology. Prof. dr. Jan C.T. Eijkel will guide us through the field of applications, with special emphasis on nanobiology.

Dr. Martien Cohen Stuart obtained his PhD in 1980 at Wageningen University, investigating adsorption of flexible polymers at solid/liquid interfaces. In 2007, he was awarded the Ostwald Medal of the German Kolloid Gesellschaft in recognition of his seminal work on polymers in colloidal systems and self-assembly. He received the AkzoNobel Science Award in 2008 and Lectureship awards from the ACS in 2009 as well as from the Japanese Chemical Society in 2010. His interests cover a wide spectrum, including topics as the statics and dynamics of macromolecules, interfaces, wetting, phase behaviour, self-assembly, networks and gels, emulsions and coalescence, and the physics of macromolecules in living cells.

Dr. Stuart is scientific director of the Dutch Polymer Institute and Chemistry Board NWO, chair of the Editorial Board of Soft Matter, and member of the Royal Dutch Academy of Sciences (KNAW).

Dr. Jan Eijkel studied pharmacy (University of Amsterdam) and theology (University of Utrecht) and obtained his PhD in 1995 at Twente University on biosensor research. Currently, Eijkel coordinates micro- and nanofluidics research in the BIOS / Lab on a chip group (‘Miniaturized systems for biomedical and environmental applications’). Recently, he received a TOP grant from NWO, a grant directed at research groups that excel in (bio)chemistry or chemical technology and have a proven track record. Jan Eijkel is a member of the American Nano Society, an international non-profit organization which aims to advance nanotechnology and nanoscience.

Music was provided by Jelmer van Veen on piano/keyboard and Johan Sarens on jazz guitar. Jelmer already performed several times before during Science Cafe Wageningen and became our ‘musician of the house’. Next to being a classical pianist, he is mainly active in improvisational music these days. His good friend Johan Sarens from Antwerp will join him this time for an interesting musical combination. Johan is a musician and instrument maker. He is influenced by many styles: ethnical music, rock, funk, free improvisation, jazz, classical and contemporary music, which made him to a multi-talented musician. 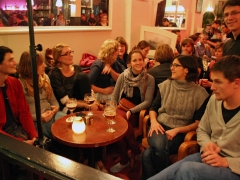 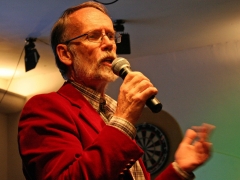 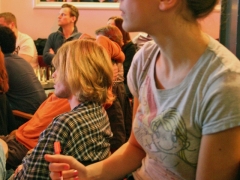 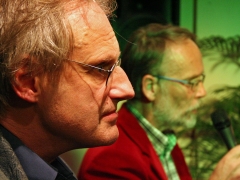 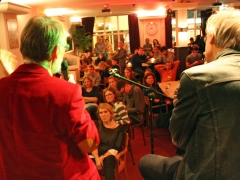 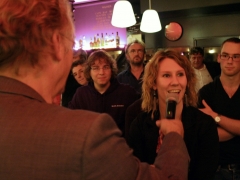 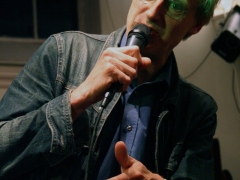 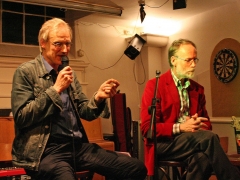