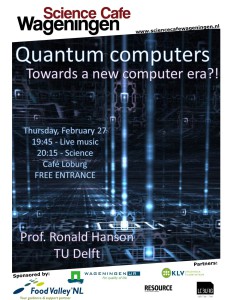 Imagine, two coins are flipped simultaneously at great distance. If one coin is head, the other is tail, and the other way around, the outcome head or tail if one coin thus depends on the other coin. This seems reasonably impossible, two coins far away from each cannot possible influence each other, or is it? Quantum mechanisms  laws explain.

Professor Ronald Hanson is  an outstanding Dutch scientist in the field of Quantum mechanics, affiliated to the Technical University (TU) of Delft. He spoke at the Science Café last Thursday about these unimaginable possibilities of quantum mechanics including two electrons being able somehow to ‘communicate’ without actually communicating. The TU Delft, was presented by the Wall Street Journal as most promising candidate to develop the first quantum computer. Hanson explained that such a quantum computer exceeds the classical computer based on bits of zeros or ones, by working with q-bits, which can be zero and one at the same time. Professor Hanson and his team try to prove that the behaviour of two electrons can be mutually dependent without regular forms of communication taking place between them. This requires placing the electrons at a distance of 1.3 km from each other.  If they succeed, they have confirmed the laws of Quantum mechanics.

The impact on society was discussed as well. Hanson pointed at a new solution to save energy: superconductors at room temperature. Apart from that he mentioned the development of new medicine and first and foremost: numerous enriching developments which we can not possibly think of at the moment.

Live music was provided by the ‘Troubagroove Trio’ led by Javier Garciá Vincente on his guitar. Javier alternates live performances with studio productions, having composed music for the Dutch television  and documentaries (Meat the Truth). Together with Pim Huitink and Simon Leferink they will play own Spanish compositions, consisting of a mix of latin, blues and jazz. 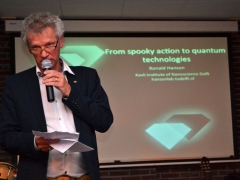 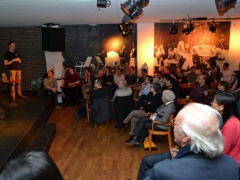 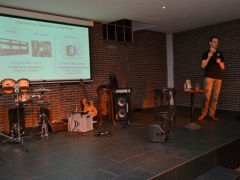 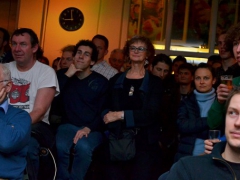 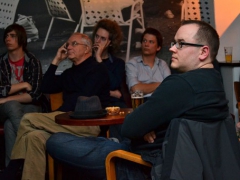 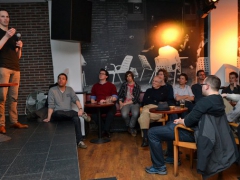 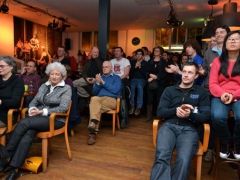 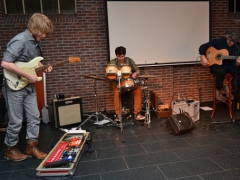