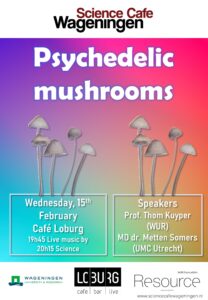 Humans have always been fascinated by mushrooms, the macroscopic fruiting bodies of fungi. Mushrooms are mysterious given their sudden aboveground appearance in various shapes, colours and odours, and the range of biochemical powers they possess. Since the 60s mushrooms with hallucinogenic properties gained attention and amongst these fungi Psilocybe species are best known. The evolutionary role for the fungi to produce biochemicals with hallucinogenic properties in humans (and other animals) is still under debate. For humans the effects of hallucinogenic mushroom consumption, or intake of the active ingredient psilocybin differ widely and range from very dangerous to innocuous. At the same time there could be scope for using psilocybin as medical treatment under well-controlled conditions. In this science cafe the speakers will explore the ecology and historic use of psychedelic mushrooms, and the medical use of psilocybin in treating severe depression.

Prof. dr. Thomas Kuyper (WUR, Soil Biology Group) is a soil ecologist with main focus on the ecology and diversity of mycorrhizal and saprotrophic fungi in natural and agro-ecosystems. He has been working on mushrooms across all continents for over 40 years, and is co-author of the Basic Book of Mushrooms and the Field Guides Mushrooms I & II. Prof. Kuyper obtained his PhD at Leiden University, worked as mycologist at Biological Station Wijster, joined Wageningen in 1999, where he became Personal Chair in Fungal Ecology & Diversity. He retired in 2020 but remains very active in investigating fungi.

MD dr. Metten Somers (UMC Utrecht) is a psychiatrist and head of the Care Line Affective and Psychotic Disorders. The main focus of his work is diagnosis and treatment of severe forms of depression, mood instability (e.g. bipolar disorder) and the treatment of psychosis. Together with the department of psychiatry of the UMC Groningen he examines the safety and efficacy of psilocybin in patients with treatment-resistant depression. Dr. Somers studied Medicine and Medical Biology at the University of Amsterdam and joined the UMC Utrecht in 2004 where he obtained his PhD and got his training as a psychiatrist.